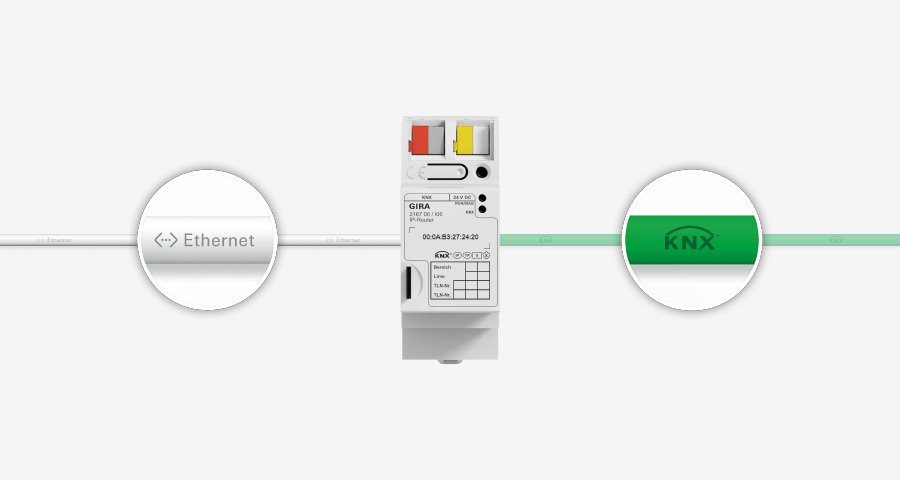 The Gira KNX IP router v4 ‘Secure’ makes it possible to load the data stored on the SD card via the device diagnostic page. This means that it is no longer necessary for the SD card to be removed on site to carry out a fault analysis – network access and the password are enough. Remote access to this data is even possible in combination with the Gira S1.

The Gira KNX IP router v4 'Secure' has an expanded filter function. This means that the functions “filter”, “forward unfiltered” and “block” are now also available for group telegrams in main group 14–31. This minimises the telegram load and facilitates efficient management of the KNX installation.

Thanks to the fact that the Gira KNX IP router can be updated, even devices that are already installed can benefit from the new functions in the ETS product database, in the data logger and on the device diagnostic page and can be used on many Gira KNX IP routers 216700. KNX Secure can be downloaded onto existing Gira KNX IP routers from index status I14.

The new Gira KNX IP router v4 'Secure' ensures rapid and trouble-free start-up with enhanced clarity in the ETS product database. Functions that are not needed can simply be hidden. This makes
operation easier and more convenient.

A special function of the Gira KNX IP router v4 ‘Secure’ is reliable communication via WLAN. In installations where KNX communication is to be transmitted via WLAN, it ensures that all commands are executed reliably and that data losses via potentially unreliable connections are minimised.

Easy to install and expand

The Gira KNX IP router v4 ‘Secure’ has an extremely compact DRA design with only two modular widths. A specific advantage of this device is the integrated network switch that enables the network line to be simply “looped through” (in the form of a daisy chain). This means that only one data line for the network has to be laid inside the distributor for several network devices – this reduces installation costs and saves time.

Software update for KNX IP router from index 02. KNX Secure is supported by devices from I14.